Despite spending close to nothing on their players in 2018, the Rays managed to win 90 games using quirky methods such as the opener. They got the most of their young players, and will look to compliment them with established veterans to balance out the team.

In an unexpected move, the Rays have signed starting pitcher Charlie Morton to a two-year, $30 million contract. Morton, 35, change his career after signing with the Astros two offseason ago. He had a 3.37 ERA in his two seasons with Houston, with a 10.4 K/9. After being a ground ball pitcher for most of his career, he became a power pitcher with the Astros, hence the high strikeout rates. Last season, he put up a higher WAR (3.5) than  he has accumulated throughout his career (2.7), and he posted a career best 3.13 ERA with a 1.16 WHIP and a 3.59 FIP. Rather than slowing down in his mid 30s, Morton seems to have just hit his peak, so age should not be a concern in this two-year contract. His average velocity is up on his fastball at 96 MPH, and his ground ball rate, hard contact rate allowed, and whiff rate were all above average. Morton seemed to have turned the corner, and with his enhanced stuff, he still possesses upside despite his age. He’ll provide a young Tampa Bay pitching staff with a much-needed veteran presence, and will form a dominant 1-2 pairing with reigning AL CY Young winner Blake Snell. The Rays don’t spend big often, but this was an effective use of their finances as it turns their rotation from a potential weakness to a strength.

The Rays have agreed to an extension with manager Kevin Cash. This new contract will keep Cash under team control through 2024, and a raise is expected. Cash, 40, may be the best manager in the MLB. Despite having little talent at the MLB level and a lot of roster turnover, he led the Rays to 90 wins and was a finalist for AL manager of the year. Cash has won at least 80 games in three of his four seasons, despite constantly managing sub par teams, and effectively utilized the “opener” strategy this season. He’s an out of the box thinker, which is perfect since Tampa Bay will need to hide up some of their deficiencies to compete with the Red Sox and Yankees in the AL East. Now that the Rays have improved their roster after their impressive season, they needed to take care of their manager so he can continue to do his job at an extremely high level, and that’s exactly what the Rays did. Cash is a superstar manager, and the small market Rays lucked out to keep him under club control for another six seasons.

Rays Acquire C Mike Zunino, OF Guillermo Heredia, and LHP Michael Plassmeyer in Exchange For OF Mallex Smith and OF Jake Fraley

The Rays have acquired catcher Mike Zunino, outfielder Guillermo Heredia, and minor league pitcher Michael Plassmeyer from the Mariners in exchange for outfielders Mallex Smith and Jake Fraley. Zunino, 27, had an extremely disappointing season last year. He posted just a .669 OPS with just a .259 on base percentage, and just a 1.9 WAR. This after a 2017 campaign in which he posted an .840 OPS and a 3.3 WAR. Zunino had a career best hard contact rate of 39.6%, but he struck out a career high rate (37%) and walked in just 5.9% of his plate appearances. Still, Zunino is a prime bounce back candidate, and even if he regains only a little of his 2017 form, he’ll still be good enough offensively for a catcher. Defensively, Zunino is elite, as evidenced with his 12 defensive runs saved in 2018. His framing (7.5 framing runs) is also elite, while his blocking and caught stealing rate are also fine. Even if he continues to struggle offensively, he still is one of the league’s best defensive catchers with 20 home run power each season. Heredia, 27, posted a .661 OPS with a negative 0.1 WAR last season. In addition to his consistently awful offense, his defense (-10 defensive runs saved) was also putrid last season. It’s unclear what he brings to the table, so for now he seems to be nothing more than a throw-in. Plassmeyer, 22, was a 4th round pick in 2018 who had 16.5 K/9 already in Low-A. He’s a player to keep an eye on as a quick-moving pitcher if he continues to combine the ability to strike batters out with good command (1.5 BB/9), like he did last year. In return, Tampa Bay gives up Smith, who didn’t have a spot in the Rays’ crowded outfield, and a prospect in Fraley that doesn’t have much upside. Tampa Bay has been looking for a good young catcher for years, and they may be rewarded with one by buying low on Zunino. It’s a terrific trade that helps them in 2019, and in the years to follow, as Zunino comes with at least two years of team control.

In a shoking trade, the Rays have acquired corner infielder Yandy Diaz and pitcher Cole Sulser in a three team trade with the Indians and Mariners. Tampa Bay will send young first baseman Jake Bauers to the Indians, and $5 million to the Mariners as well. Diaz, 27, has been alright for the Indians in a liited role. In two seasons and 299 career plate appearances, he’s posted a .738 OPS and a 0.6 WAR. Last season, he posted a .797 OPS with a .375 on base percentage and a 0.2 WAR. The hope is that with a more expansive role, Diaz with his ability to get on base will thrive. That has to be the thought process, as Diaz is not a proven player by any means. Unlike Bauers, he can play both corner infield positions, though he’s average at both. For Diaz to improve, he needs to hit the ball on the ground less (2.29 GB/FB rate). Still, he consistently makes contact and does so well (44.4% hard contact rate). There’s definitely some room for Diaz to grow into an everyday starter, but he’s four years older than Bauers and doesn’t possess the same upside to develop into an all around player. Sulser, 28, had a 3.86 ERA between Double-A and Triple-A. He did have 14.1 K/9, which could translate to success as a reliever, but he’s yet to pitch in the majors. Tampa Bay acquires two unproven players with little upside for a former top prospect who had the upside of an All Star first baseman in Bauers. This doesn’t hurt Tampa Bay right now, in fact it may help them a little, but they may regret this trade in the future.

Rays Acquire RHP Rollie Lacy, RP Emilio Pagan, and a Competitive Balance Round A Pick In Three Team Trade With Rangers and A’s 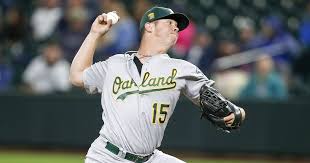 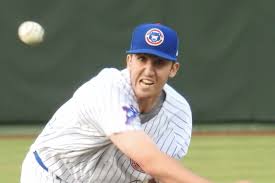 In a three team trade with A’s and Rangers in which utility player Jurickson Profar heads from Texas to Oakland, the Rays have acquired reliever Emilio Pagan and a Competitive Balance Round A Pick from the A’s, as well as minor league pitcher Rollie Lacy from the Rangers. Pagan, 27, has been a serviceable reliever for the Mariners and A’s in his first two seasons. Last season with Oakland, he posted a 4.35 ERA with a 1.19 WHIP and a 4.92 FIP. Pagan does a solid job of striking batters out while limiting walks, but he’s a fly ball pitcher who gave up a lot of hard contact last season. Since inducing ground balls aren’t his style, he’s going to have to do a better job of limiting hard contact, especially since he’s leaving pitchers friendly O.Co Coliseum. Lacy, 23, was traded from the Cubs to the Rangers in the Cole Hamels trade, and now heads to the Rays. Between Low-A and High-A last season, he posted a 2.97 ERA with a 1.17 WHIP. Up to this point, he’s done a good job of inducing ground balls, as well as striking batters out (10 K/9). He’s not a highly rated prospect, but he’s had an ERA below 3.00 in each of his first two seasons. He has a sinking fastball with a funky delivery, which he needs since his fastball barely hits 90 MPH. He could end up as a back of the rotation starter or a long/middle reliever. Unfortunately for Tampa, they traded away a high end prospect to get these two average pitchers in Brock Burke. The 22-year-old already reached Double-A and is projected by MLB.Com to establish into a middle of the rotation starter.The other two prospects the Rays gave up are low end prospects they could afford to give up. Burke was technically expendable in their stacked group of young pitchers, but he could have been used to land more MLB ready talent than a reliever who just posted an ERA north of 4.00. The acquistion of the Competitive Balance Round A pick helps this trade make more sense for Tampa, but this trade is somewhat puzzling to say the least.

The Rays have signed outfielder Avisail Garcia to a one year, $3.5 million contract that can go up to $6 million with incentives. Garcia, 27, had a disappointing season with the White Sox last year. Coming off a season in which he posted a .885 OPS and a 4.6 WAR, he regressed to a  .719 OPS and a 0.3 WAR. He also played in 93 games due to a series of injuries. While it may be possible that 2017 was a fluke, there’s reason to believe that Garcia will bounce back this season. Despite posting a career best hard contact rate of 38.2% with a lower ground ball rate, his batting average balls in play dropped from .392 to .271. While it’s likely impossible for him to have the type of luck that he had in 2017, if his batting average balls in play goes back up to around .325, as STEAMER projects, then he’s in store for somewhat of a bounce back. In that case, Garcia will likely be able to have an OPS around .800, which on its own makes him worth it for the Rays. If his fielding (-5 drs) also bounces back (11 drs in 2017), then Tampa will be getting even more value. Considering he may slide in as their DH anyway, that may not even matter. Either way, the Rays are taking a smart gamble on a player who suffered a lot of bad luck last season, and they’ll likely be rewarded with above average offensive production from Garcia. For a team that needed to upgrade their lineup without a lot of spending power, this is a fine move for Tampa.

*Will Be Updated With Every Move The Rays Make

One thought on “Tampa Bay Rays Offseason Tracker and Analysis”