Since it’s a sport with a 162-game season, and in which superstars can’t impact a game, it can be argued that building a winning team in baseball is significantly harder than other sports, such as football and basketball. However, front offices are expected to build a winning team over time, and having an optimal strategy can really benefit them. At the moment, there doesn’t appear to be a clear way to build a winning team, which inspired this study. Looking at the past ten seasons, I have compiled data (offense, defense, batter WAR, pitching WAR), in the hopes of finding a pattern on what moves the needle for MLB teams.

To measure team performance, I’ve chosen to look at their expected wins (xWins), rather than their actual win-loss record. By doing this, I’ve taken out luck, which can lead to unsustainable win-loss records, and would be a confounding variable in this case. This is also known as their “Pythagorean wins”, which was created by Bill James; it essentially uses a team’s run differential to determine how many games a team should’ve won, and is thus a better measure of how talented a team actually was. As for the number of years, ten appeared to be the perfect balance between obtaining a large enough sample size without leading to more confounding variables, such as overall team strategy.

As demonstrated in our last study, position players account for 57.3% of the league’s total Wins Above Replacement (WAR), although we concluded that each position player on average is worth the same amount as a starting pitcher. However, as a whole, it appears that a team’s lineup is more predictive of their success than their pitching staff, including both their rotation and bullpen:

Based on the coefficient of determinations (r^2) of these two graphs, a team’s xWins over the past ten seasons can be explained 31% more from their position player WAR than their pitcher WAR, which is a substantial gap. Plus, the relationship between (batter WAR minus pitcher WAR) and xWins was positive, while it was negative for the reverse difference. In other words, teams who had a better lineup than pitching staff generally fared better than those who had a better rotation than lineup.

On the bright side for proponents of pitching, however, the difference in the r^2 values between position player WAR and pitcher WAR has shrunk over the past five seasons: 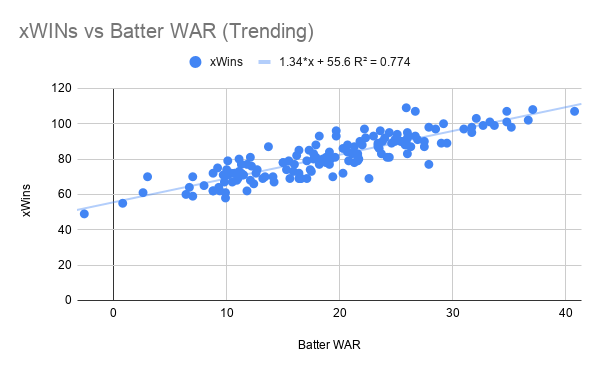 While the coefficient of determination has gone up around 6% for position player WAR, it has increased roughly 20% for pitcher WAR. There is still a strong enough difference in r^2 values between the two to suggest that position players are more impactful than pitchers, but it’s certainly not as extreme as it once was.

So, if a team’s lineup is more valuable than their pitching staff, should they be looking for offensive-minded players or defensive-minded players? Obviously, balance is critical, but it’s clear than offense, rather than defense, moves the needle for teams with winning aspirations.

OFF= Batting Runs + Base Running Runs

For more information on each of these two statistics, I’d recommend going to Fangraphs (OFF, DEF), but here are the main points:

As illustrated by the graphs above, a team’s offense has been a significantly better indicator of their success than their defense. For context, four of the five playoff teams in the American League (Yankees, Astros, Rays, Twins) ranked in the bottom ten in DEF last year, while the top two teams (Phillies and Diamondbacks) did not reach the postseason. Meanwhile, each of the top 11 teams in OFF had winning records last season, and none of the bottom-fifteen ranked teams in this statistic made the postseason. That would indicate that the idea of offense being more valuable than defense has persisted over time, which would be true:

The coefficient of determination for both offense and defense have increased by roughly the same rate when specifically looking at the past five seasons, which proves that our original claim is still intact. Similarly to position players and pitchers, teams who have had better offense than defense have fared better than the other way around; when you’re building your lineup, it’s imperative that offense is the priority over defense.

Now, what should be taken away from all this information? By no means am I suggesting that pitching or defense is not important. However, there is a clear hierarchy in terms of  importance, and offense reigns supreme. It’s important to still have average pitching and average defense, but if a front office wants their team to be one of the elite teams that are capable of winning a World Series title, they cannot settle for average offensively.

Why is this the case? There isn’t one exact reason why the hierarchy is the way it is, but it may have to do with supply and demand. Since there are naturally less high-end pitchers than there are star position players, it’s much harder to build a team through its pitching, as ace pitchers come at a very high price. With that, once could make the case that developing pitching is actually more important; it’s potentially easier to find position players on the open market It’s not necessarily “better” to build your team through offense than pitching, but it’s so difficult to do so the other way that smarter organizations have no choice but to use their resources effectively; teams too often trap themselves into overpaying for second-tier pitchers, which won’t move the needle. The Twins, for instance, were supposed to improve their pitching staff, per most media outlets. However, they further bolstered their elite lineup by adding Josh Donaldson, who, as a star third baseman, will be more valuable than a flawed pitcher like Madison Bumgarner or Hyun-Jin Ryu. Front offices should be focused on putting together the best collection of players possible, and since it’s much more convenient to do so with their lineup, Minnesota can perhaps serve as an example of how more teams should go about upgrading their teams.

If a front office wants to build a winning team, they cannot settle for average offensively. Offense is simply much more impactful than defense, and with how difficult it can be to build through pitching, it’s much more sensible to try to build an elite group of position players. Now, one shouldn’t be massively below-average in any particular area, as the Angels have learned, but I’d much rather be average at allowing runs than be average at scoring runs- it’s much more correlated with team success. For perspective, it’s not too dissimilar to football; in the NFL, teams with average defenses and elite offenses succeed much more than the other way around, and that appears to be the case as well in the MLB. Lead decision-makers are often too worried about filling needs, but their objective should be to build the best group of 26 players possible; the logical way to do so is by focusing on building a formidable lineup, and more specifically offense, over filling out the pitching staff.

7 thoughts on “Study: Offense vs Defense vs Pitching, What Is The Best Way For MLB Teams To Build a Contender?”