Team-building is just a fascinating phenomenon is sports, and, honestly, it is my favorite part about studying them. There are so many different strategies that lead executives take towards building a championship-caliber roster, and since they come from different backgrounds, their values are completely different. There isn’t a sport where this isn’t more obvious than in the NFL. While more executives are “analytically-minded” and have embraced new philosophies, most still come from a scouting background and tend to adopt more traditional philosophies. Meanwhile, this is also apparent in the media as well; sites like Pro Football Focus have grown in popularity as they attempt to better educate football fans on how to properly analyze the sport, but most media outlets still embrace convention wisdom. Unfortunately for the common football fan, this grasp on conventional wisdom has led to a lot of misconceptions of team-building. We’ve gone over positional value  in the past, as well as optimal draft strategies and individual player rankings, but, in the end, no individual player can ultimately dictate a player’s fate. Ultimately, a team’s destiny is determined by their overall roster, and some variables just matter more than others. Today, we’ll look at the correlation of team success versus offense and defense, before also analyzing the importance of each aspect of those two units.

One misconception that continues to spread like wildfire is the idea that “defense wins championships”. Yet, that couldn’t be further from the case. To better grasp the importance of offense and defense, we’ll compare a team’s Pro Football Focus (independent variable) grade versus their point differential (dependent variable). Using point differential allows us to eliminate confounding variables such as luck in one-score games, while using Pro Football Focus’ team grades for each unit gives us a nice baseline on their overall talent. The data we’ll use will go through 2015, as it gives us the ideal balance of a large enough sample size and keeping our statistics within the “modern NFL” to better reflect team-building in 2020.

Based on the coefficient of determination for each of the two scatterplots, offensive talent appears to be slightly over 1.7 times more predictive of team success than defensive talent. Although that may seem extreme to some, it makes perfect sense. Offenses control the game, as they’re at an advantage of knowing what play they’re running- they just have to execute it. Meanwhile, defenses have to react to what the offense does, which makes their performance more impacted by the opponent. That would make that unit more susceptible to regression, and since it’s more dependent on other variables, the talent required to build a winning team on that side of the ball, compared to on offense, is much less. The Steelers last year, for example, had a fantastic defense, yet needed luck to win eight wins due to a very poor offense. On the other hand, 2015 and 2016 Saints had positive point differentials despite having a historically poor defense.

So, what makes a good offense? To answer that question, we’ll compare each aspect of offense (passer, receiving talent, pass protection, runner, run blocking) with the amount of points the team scored. Although points scored isn’t the perfect variable, as field positioning can dictate it, that’s more of an issue regarding potential outliers, rather than the entire sample size. 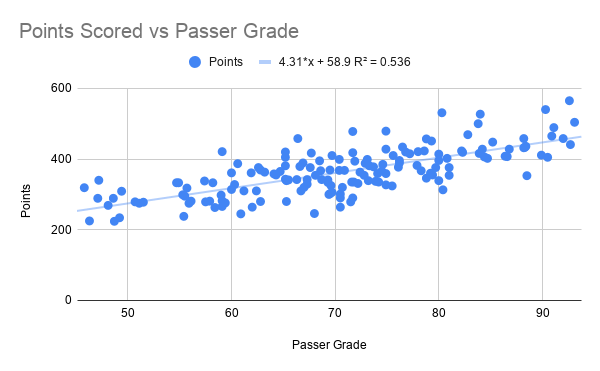 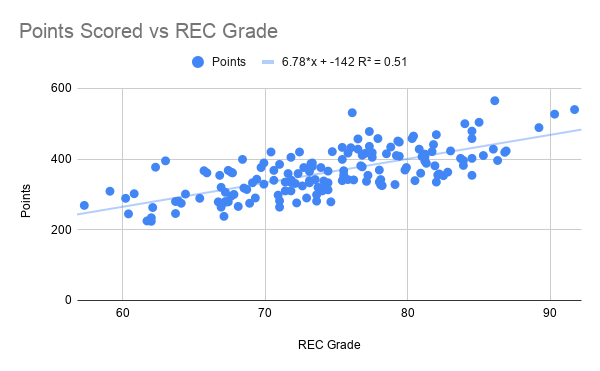 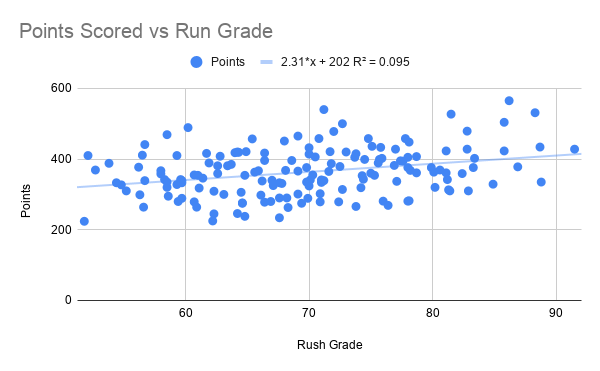 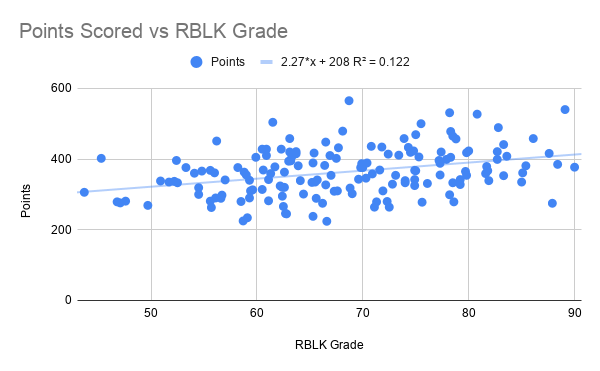 On the surface, the idea that the quarterback only takes up 40% of the equation, based on the coefficient of determination for each of the scatterplots, may feel slim. However, consider this: one player (quarterback) is nearly as important as the other ten players on the field. Therefore, teams with high-end quarterbacks, such as Patrick Mahomes and Russell Wilson have extremely high floors, and when it comes to team-building, the value of a talented passer cannot be overstated. What’s most interesting, though, is a finding that clearly combats a misconception- you win in the trenches. Sure, it’s important to have a capable offensive line. Yet, if you look at the scatterplot, it’s clear that the benefits of being elite in the trenches aren’t there; as long as a quarterback has enough time to throw, that’s all they need to be in a position to succeed. Plus, since quarterbacks tend to control their pressure rate, it’s far easier to hide flaws on the offensive line than it is with a team’s receiving talent. The Patriots, for instance, had an offensive line that graded out well, but looked worse since Tom Brady had to hold onto the ball for too long- the team’s receivers struggled to separate. Meanwhile, teams like the 2018 Chargers, 2015 Patriots, and the 2015-2019 Seahawks have been able to produce like a top-ten offense despite having subpar offensive lines; their receiving talent outweighed the issues upfront. Where being strong in the trenches does matter is in the running game, as the offensive line tends to be more valuable than the running back. At the same time, though, the aspects of a passing offense are worth over 83% of the equation of a strong offense, so it certainly looks like successful offenses are built through the quarterback, and who they throw the ball to.

Although offenses are of a much larger significance than defenses, the latter unit still is a meaningful part of a team’s roster. To analyze all the different variables of defense, we’ll look at how many points a team is allowing versus their grades in each of the key areas (run defense, pass rush, coverage): 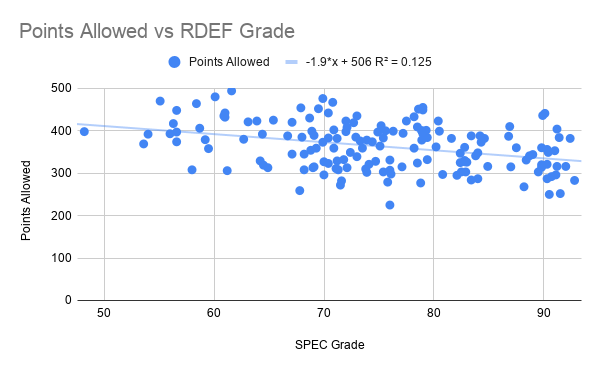 First off, I’ll address the obvious: as teams pass more, defending the run is far less important, which means that you don’t need to significantly invest resources on run-stopping front-seven players. However, analyzing what makes a good defense isn’t as simple as that. Throughout football’s lifespan, pass rush has been seen as easily the most important part of a team’s defense. Yet, that couldn’t be further from the case. In fact, a team’s coverage grade is over six times more predictive of defensive success than their pass rush grade, which completely debunks conventional wisdom. As we discussed with the “receiving core versus offensive line” debate, receivers getting open dictate how long a quarterback holds onto the ball, which dictates their pressure rate. Well, if that’s the case, then wouldn’t it make sense that preventing players from getting open would be more important than the pass rushers themselves? After all, a pass rusher can win early, but he’ll be lucky to be even credited with a “pressure” if a receiver is able to create instant separation. Proponents of the value of a pass rush will be quick to point out the 2019 49ers, 2018 Bears, and 2017 Jaguars as teams who generated a lot of pressure on the opposing quarterback, but what did all of those teams have in common? None actually led the league in pass-rush grade, but they all ranked first in coverage grade, and there aren’t a lot of examples of a defense succeeding by being one-dimensional towards their pass rush. Additionally, as the Ravens demonstrated this year, it’s possible to manufacture pass-rush production by utilizing various blitz packages, but the same doesn’t appear to be true with coverage production. Add in the fact that you need 5+ coverage defenders to avoid any weak-links, and it’s shocking that so few teams actually build their defense from their secondary.

So, what should we take away from this? For starters, it’s clear that defensive talent is not the reason why teams win championship, especially since production on that side of the ball is far reliant to other variables than offensive production. Also, in a passing league, teams do in fact need to be able to pass the ball and stop the pass to have success, and that doesn’t come through the trenches. Outside of securing a franchise quarterback, who’s value cannot be overstated, teams need to build through the perimeter, and simply need to be average in the trenches. For some, it may be difficult to adjust to this new theory, as is the case for conventional wisdom in any area of life. However, teams like the Ravens and Patriots have adopted this strategy for years, and it should come to no one’s surprise that they’ve been amongst the league’s most consistent teams. Yet, even as teams hire coaches and executives from these organizations, most have failed to successfully “copy” them, as it appears that there tends to be way too many misconceptions about why a team is successful. Hopefully, as the use of analytics and quantifiable data continues to grow, this will change in recent years. After all, if more teams build through the perimeter, we’ll not only have less discrepancy of roster talent through the league, but simply a more enjoyable sport to watch. So, without further adieu, let’s embrace change together!

5 thoughts on “What Actually Wins NFL Games? Not What Conventional Wisdom Wants You To Believe!”